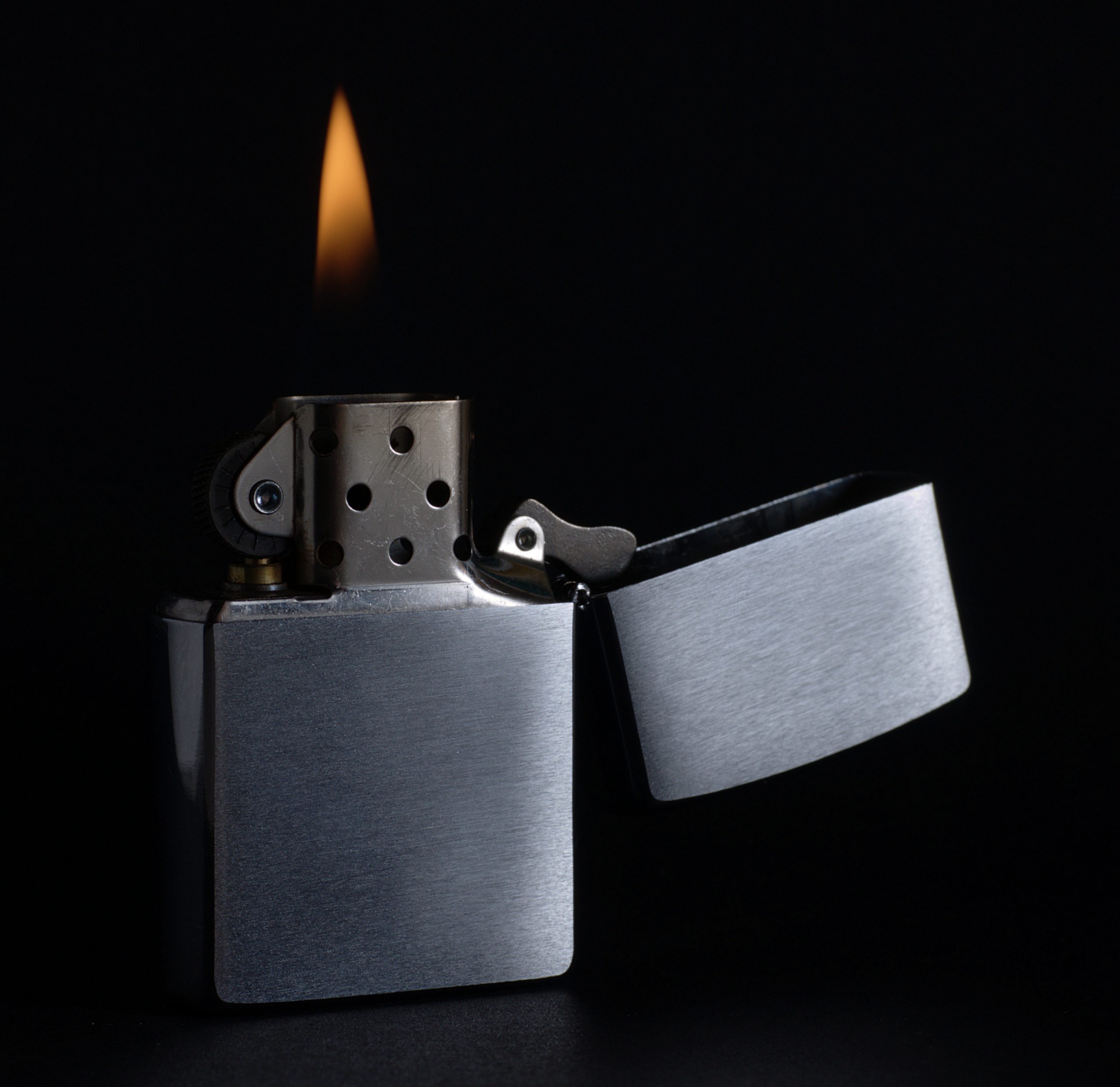 The enduring question for non-cigarette-smokers is, “Can I pull off a Zippo?”

The answer is a yes, but a qualified one. If you’re going to carry around a Zippo for the aesthetic or for the lighter fade in your jeans, you should at least know a thing or two about the history of this quintessentially American brand… you know, in case anyone asks.

So, for smokers and posers alike, we’ll cover the history of this storied accessory; from its civilian and military careers, to its current place in the collective imagination.

German chemist, Johann Döbereiner is credited with inventing the first ever lighter in 1823. The “tinderbox,”as it was known, relied on hydrogen gas reacting with a platinum sponge and atmospheric oxygen to generate a gentle flame when a valve was opened. The technology was anything but simple and not something that could fit in someone’s pocket.

The big break for the modern lighter came with the incorporation of a relatively new substance: ferrocerium. Ferrocerium allowed for effective flints to be placed in lighters. Now, instead of a complicated and potentially dangerous chemical reaction, a spark above a fuel source (usually naphtha) would do the trick.

The size and shape of the modern lighter is owed to matches, which were also a fairly new and unreliable technology. Friction matches had barely arrived on the scene and could accidentally ignite in their owner’s pocket. Match cases or match-safes were metal and roughly lighter-size and became a product that people wouldn’t leave the house without.

The lighters of the early 1900s are difficult to find and many have fallen into disrepair, but the 1920s saw an uptick in lighter popularity and quality. This is due, in part, to the popularity of lighters during World War One, when soldiers preferred them to matches and even improved their design with small “chimneys” to cut the wind.

The Birth of Zippo

George Blaisdell, as the story goes, witnessed his friend struggle with a manual lighter. This manual lighter had a wheel, which struck a flint to produce a flame, but it was unwieldy and required two hands to open and close. By 1932, Blaisdell had made a design would go into full production the next year, and in 1936 would receive US Patent US2032695A. While other manual lighters existed, the Zippo became known as the best.

Zippo’s pared down design, high fuel capacity, and trademark “clicking” top; made for an instant classic. Other lighters of the day, like the automatic lighter from Ronson, were elegant, but didn’t fare especially well in the elements or hold up to day to day wear. Zippo immediately set itself apart with its simple, hardy design and its lifetime guarantee. These same qualities made Zippos the perfect lighter for the American military, which is why during WWII, Zippo ceased all civilian production.

With all brass requisitioned for military use, Zippo used steel for its wartime edition, then painting the whole thing black.

The war-time “black crackle” lighters were a little crude, but they worked extremely well and returning servicemen were eager for civilian replacements. To spread the good word, Mr. Blaisdell took to the road in a specially designed Zippo car.

Folks in the 1950s loved to smoke and Zippo was there to help them do it. The 50s saw Zippo re-patent their design, introduce a slim lighter designed for ladies (which men still liked), and begin stamping the date of production on the bottom of their product. Zippo also began introducing collectible models, like those for Town And Country, GE, and Kelvinator Refrigerators. Inexpensive and long-lasting, consumers began collecting lighters, which could last lifetimes.

The Zippo, which had maintained its sterling reputation in WWII, became somewhat subverted by its large role in Vietnam. Soldiers in this conflict chose to use Zippos for their lighting needs, which could range from lighting cigarettes to burning the homes of many innocent Vietnamese civilians.The Zippo lighter also served as a canvas for the disillusionment and anger of soldiers trapped by the draft in Vietnam.

On a more sordid note, search and destroy missions so frequently involved Zippo-lit blazes, that they were often called “Zippo Raids” or “Zippo Missions.” The Zippo in this American conflict was less All-American and more imperialist American. The tough, little lighter took on far darker notes that resonated in pop culture.

With fewer and fewer cigarette-smokers on the streets, the place we most often see this famous lighter is in film. What had before been associated with the debonair and righteous hero, became a tool used by more hardscrabble anti-hero types – like John McClane in 1989’s Die Hard. Also, as fewer Americans smoked in general in the later twentieth century, having a lighter became a somewhat transgressive symbol in and of itself.

Zippo often touts their product’s importance in film, claiming that theirs is often a “key prop,” that can make or break a story. Can’t say for certain that that’s true, but it certainly makes seeing in air-conditioning vents easier.

Zippo, you may have noticed, is alive and well. Their products are still made in the U.S. and can be had for around $25. The lifetime warranty still stands, a rarity in a world of disposables. Zippo has acquired a number of other brands, including Ronson and the W.R. Case and Sons Cutlery Company; and in so doing, have significantly diversified their offerings.

Zippo reproduces many of the classic models mentioned in this article, so even if you don’t smoke cigarettes, you can carry a piece of global history right there in your pocket. Look no further than Rollo Tube Australia’s website, where you can nab several of the most popular examples.