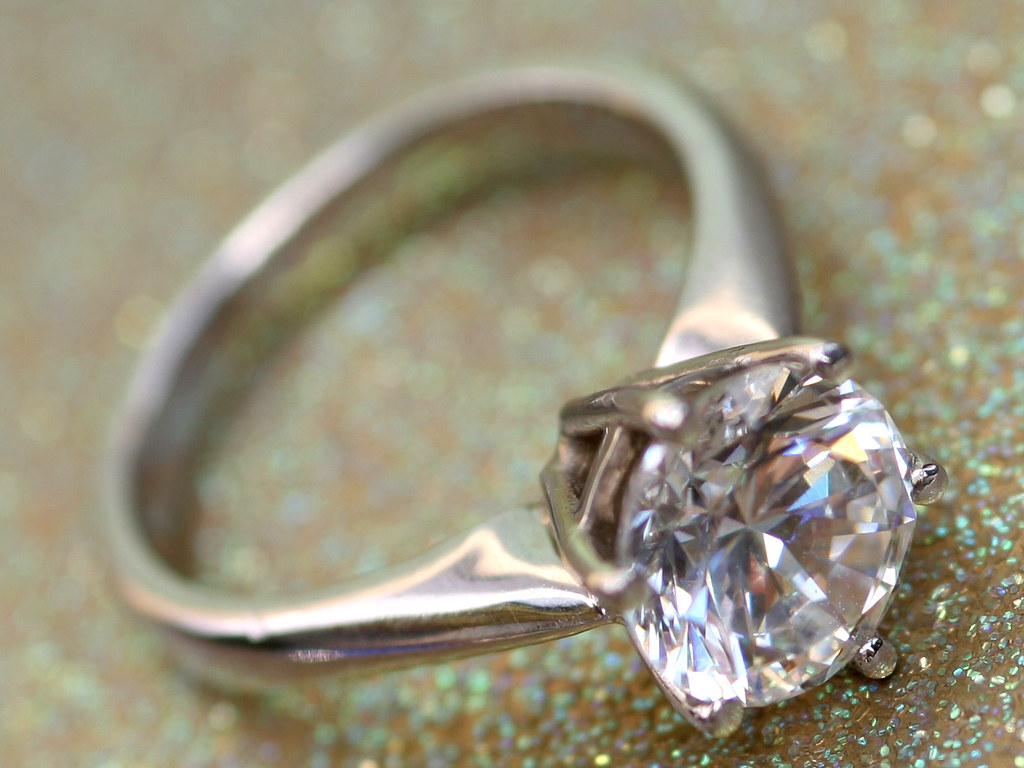 For as long as people can remember, the diamond engagement ring has been a symbol of love and commitment. Whether a classic solitaire or an antique cut, the giving of this precious gem from the depths of the earth is the most widely accepted symbol of being engaged. But have you ever thought about the origins of this tradition? And why is it that diamonds are the enduring gemstone of choice for an engagement ring? In this article, we dive into the history of the diamond ring and try to answer these questions.

Where did it all begin?

The circle was the symbol of eternity, with no beginning or end, not only to the Egyptians, but many other ancient cultures. The hole in the center of the ring also had significance. It wasn’t just considered a space, but rather a gateway, or door, leading to things and events both known and unknown. To give a woman a ring signifies never-ending and immortal love.

The materials these rings were made of didn’t last very long and soon were substituted with rings made of leather, bone or ivory. The more expensive the material, the more love shown to the receiver; the value of the ring also demonstrated the wealth of the giver.

The Roman’s also eventually adopted this tradition but with their own twist. Rather than offering a ring to a woman as a symbol of love, they awarded them as a symbol of ownership. Roman men would “claim” their woman with the giving of a ring. Roman betrothal rings were later made of iron and called “Anulus Pronubus.” They symbolized strength and permanence. It is also said that the Romans were the first to engrave their rings.

Why are rings worn on the 4th finger of the left hand?

Wedding rings through different stages in history have been worn on different fingers, including the thumb, and on both the left and right hands. According to  a tradition believed to have been derived from the Romans, the wedding ring is worn on the left hand ring finger because there was thought to be a vein in the finger, referred to as the ‘Vena Amoris’ or the ‘Vein of Love’ said to be directly connected to the heart. However, scientists have shown this is false. Despite this, this myth remains regarded by many (hopeless romantics) as the number one reason rings are worn on the fourth finger.

Another theory thought to be behind the ring being placed on the left hand by Christians seems a little more plausible. Early Christian marriages had a ritual to wear the wedding ring in the third finger. As the priest recited during the binding ,”In the name of the Father, the Son and the Holy Spirit”, he would take the ring and touch the thumb, the index finger, and the middle finger; then, while uttering “Amen”, he would place the ring on the ring finger, which sealed the marriage.

A more practically based theory is that the soft metal (traditionally gold for wedding rings) is less worn or injured on the finger of the left hand, due to most of the world being right-handed.  Further, the fourth finger on the left hand is probably the second to the least used finger on a person’s hands outside of pinkies.  Pinkies being small, making a small ring with little surface area to decorate, perhaps motivated people to then place it on the next least used finger, namely the fourth finger on the left hand, which is roughly the size of the other fingers.

So now that we’ve covered the band, why do we offer diamonds?

It was in fact a brilliant marketing campaign in the 1930s. The famous mining company De Beers opened up digs in Africa and uncovered a vast quantity of previously undiscovered diamonds. This sudden surge in availability shattered the elusiveness and exclusivity of the diamond industry. In an effort to reverse their declining sales, De Beers had to do something to change people’s perceptions, once and for all.

Most remarkably, De Beers manipulated not just supply but demand. In 1938, amid the ravages of the Depression and the rumblings of war, Harry Oppenheimer, the De Beers founder’s son, recruited the New York–based ad agency N.W. Ayer to burnish the image of diamonds in the United States, where the practice of giving diamond engagement rings had been unevenly gaining traction for years, but where the diamonds sold were increasingly small and low-quality.

Meanwhile, the price of diamonds was falling around the world. The folks at Ayer set out to persuade young men that diamonds (and only diamonds) were synonymous with romance, and that the measure of a man’s love (and even his personal and professional success) was directly proportional to the size and quality of the diamond he purchased. Young women, in turn, had to be convinced that courtship concluded, invariably, in a diamond. The results of the marketing were undeniable – an increase of 50% in the diamond sales sector in just three years.

Does the expression ‘A diamond is forever’ ring a bell? The first time it was publicly introduced was in 1947 during another marketing campaign by De Beers, which boosted their sales even further.

While the origins of diamond engagement rings are fascinating, what’s undeniable is their continuing appeal today. Whether it’s because of a diamond’s durability, sparkle or simply its beauty, there will unlikely be anything that matches its symbolic value.

Ready to declare your love to your soulmate? Visit Hofland Diamonds Inc. where you can find modern and antique diamond rings of all colors, shapes and sizes.